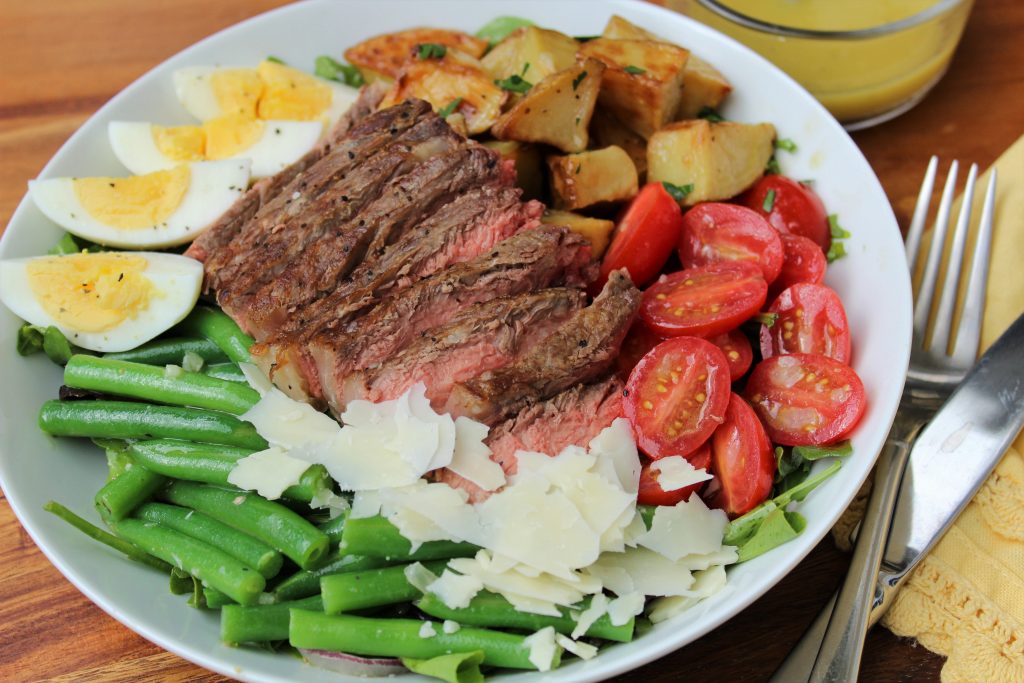 There is no rhyme or reason to the recipes I select for my cooking segments on Charlotte Today. Inspiration can come from anywhere. I’ve been inspired while watching Food Network or PBS, sitting in car line, reading a book, folding laundry. It doesn’t matter what I’m doing, recipe ideas just come to me. Most of the time if they sound good in my head, I can make them taste good in reality.

I was in the garage filing away my tax return when nicoise salad popped into my head. Don’t ask me why. Maybe not owing the government money made me think about salad with tuna in it.  Or maybe it was close to lunch time, and I was just hungry.  That same day I got the email requesting my recipe for my next appearance on Charlotte Today. Since nicoise salad was fresh in my mind, I went with that.

For testing purposes, I made the salad more appealing to my family by replacing the tuna with steak. Traditionally, nicoise salad is made with capers and olives, neither of which I like, so I didn’t include them in my recipe. I also decided to step away from the classic composed salad and shake things up—literally. Tossing the salad combined a medley of flavors and seemed more fun than just arranging the ingredients on a platter.

I learned on-air that by the time I finished putting my spin on nicoise salad, it was no longer a nicoise salad. But it was delicious and quite satisfying.

Let me know when you make this recipe. Take a picture and hashtag it #QUEENCITYKITCHEN on Instagram. I can’t wait to see what you post! 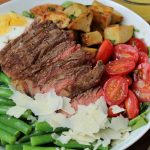 Whisk the shallot, garlic, vinegar, water, mustard, and anchovy in a large bowl until combined. Slowly drizzle in the olive oil, whisking constantly until emulsified. Season to taste with salt and pepper and set aside.

Preheat the oven to 425 degrees F.

Cut the potatoes in half or quarters (depending on the size) and place in a bowl with 1 tablespoon olive oil, ½ teaspoon salt, and ¼ teaspoon pepper; toss until the potatoes are well coated. Spread the potatoes in a single layer on a baking sheet. Roast in the oven until browned and crisp, about 60 minutes. Flip the potatoes halfway through cooking. Remove the potatoes from the oven and toss with parsley. Season to taste with salt and pepper.

Heat oil in a large ovenproof skillet (not a nonstick) over medium-high until hot and smoking. Pat the steaks dry with paper towels. Generously season each side of the steaks with salt and pepper.

Blanch the green beans in a large pot of boiling salted water until crisp tender, about 2 minutes. Drain immediately and immerse the beans in a bowl of ice water to stop cooking. Drain.

Combine the potatoes, green beans, tomatoes, and lettuce greens in a large bowl. Drizzle a small amount of vinaigrette over the salad and gently toss to coat, adding more vinaigrette as needed. Season with salt and pepper. Transfer salad to serving bowls and top with sliced steak and eggs. Garnish with shaved Romano.