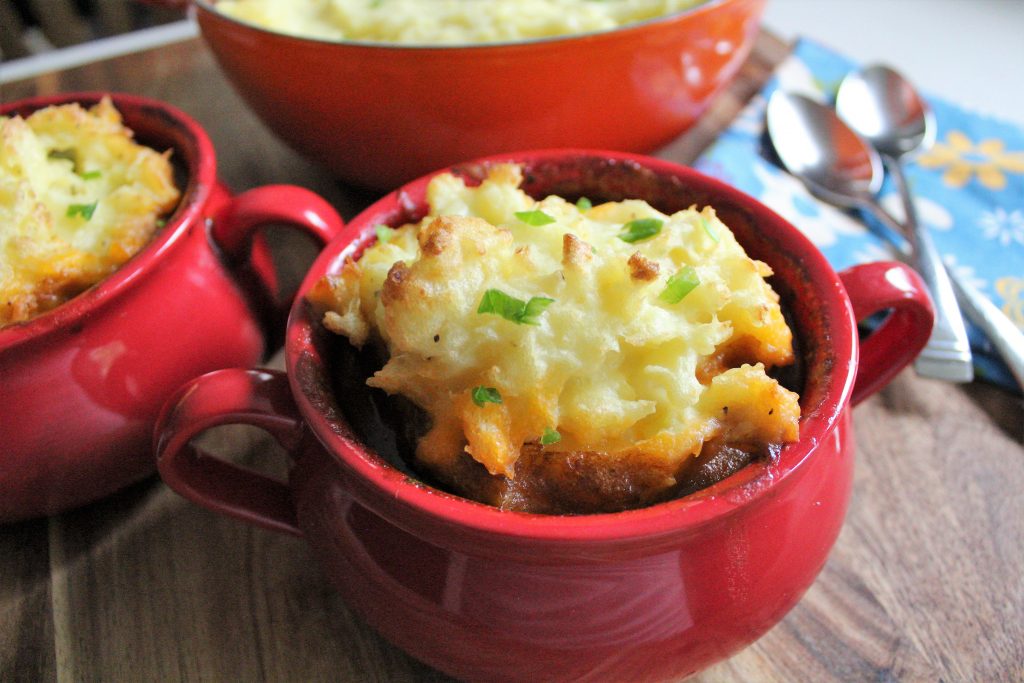 “I’m listening.” Who doesn’t want to hear those two little words from her beloved?

Once I had his attention, I went in for the kill. I said, “Woodpeckers chewed up the side of the house, and one of us is going to have to sell a kidney to pay for it. And I’ll put cheese and extra butter in the mashed potato topping.

He was very attentive, almost hypnotized by the notion. He said, “Cheese and butter.”

Cheese and butter got him right were I wanted him. I said, “And the bottom two steps fell off the deck, so we have to get that fixed, too.” He almost came to his senses after that bit of information, and I needed to act fast. “How about I add some barbecue sauce to the short ribs?” That pulled him back into my clutches.

I rushed to the market, got my supplies, and went to work making the mother of all shepherd’s pie. By the time dinner rolled around, the house smelled like I meant business. We sat down to eat, and I served him a manly heap of shepherd’s pie. Big Daddy dove right in, his appreciation noted with each satisfied sigh. Once he finished and pushed his plate away, he said, “That was amazing, and you are the most beautiful woman on the planet. You’re a good wife, too.” He pushed away from the table and got to his feet. He leaned down, kissed my cheek, and said, “Your Italy money is paying for the deck. Dinner was great.” He walked to the living room rubbing his belly.

The magic was gone, and so was my dream of strolling through the streets of Florence in a floral dress with big Hollywood sunglasses and a silk scarf on, looking like a black Sophia Loren. I took solace in the fact that dinner was a success, even though it’s mind-control effect on my husband was short lived.

Season the short ribs with salt and pepper and allow them to sit at room temperature for 1 hour. Heat olive oil in a Dutch oven over medium-high heat. Sear the ribs, in batches, until well-browned all over, about 3 minutes per side. Transfer the ribs to a plate.

Preheat the oven to 300 degrees F.

Pour off all but 2 tablespoons of fat from the skillet and return the pan to medium heat. Add the onion, carrots, and celery and cook until the vegetables begin to caramelize, about 5 minutes, stirring occasionally. Stir in the tomato paste and garlic and cook 2 additional minutes. Increase the heat to medium-high and pour in the Guinness. Simmer until the beer is reduced by half, about 5 minutes, scraping up the brown bits from the bottom of the pan. Stir in the broth, barbecue sauce, and Worcestershire sauce. Tie the thyme, rosemary, and bay leaf together with kitchen string and add to the pot. Return the short ribs to the pot along with any juices on the plate. Add additional beef broth to the pot, if necessary, to almost cover the ribs. Bring to a simmer, cover, and transfer to the oven. Braise until the ribs are fork tender, about 2½ hours, turning them after 1 hour of cooking time.

While the short ribs are cooking, prepare the potatoes. Place the potatoes in a medium saucepan and cover with cold water. Heat over high heat, cover and bring to a boil. Once boiling, remove the cover and reduce the heat to medium. Simmer until the potatoes are fork tender, about 15 minutes. Melt the butter over medium-low heat in a small saucepan with the heavy cream. Drain the potatoes in a colander and return them to the saucepan. Mash the potatoes then pour in the heavy cream mixture. Continue to mash until smooth. Stir in the cheese and season with salt and pepper. Keep warm until ready to use.

When the short ribs are done, remove them from the pot and place on a plate to cool. When the ribs are cool enough to handle, pull the bones from the meat and discard. Shred the meat with two forks, removing any large pieces of fat. Remove the herb bundle from the gravy and discard. Skim the fat from the surface of the gravy.

To finish the filling, heat 1 tablespoon olive oil in a medium skillet over medium-high heat. Add the mushrooms and cook until golden brown, about 5 minutes. Season with salt and pepper. Add the mushrooms, peas and parsley to the Dutch oven. Depending on the amount of gravy in the pot, dissolve the cornstarch in water to make a slurry. Stir the slurry into the gravy until incorporated. Return the pot to the heat and bring to a boil over medium-high heat. Season to taste with salt and pepper. Stir the reserved meat into the gravy then transfer the filling to a large baking dish, leaving enough room for the potato topping.

Spoon the mashed potatoes on top of the meat filling and spread to the edges of the dish. Place the dish on a foil-lined baking sheet and bake until the filling is bubbling and the potatoes are golden brown, about 40 minutes. Cool for 5 minutes before serving. Garnish with chopped chives.