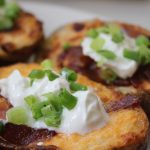 Preheat the oven to 425 degrees F. Pierce the potatoes a few times with a fork, rub with olive oil and season with salt and pepper. Bake until the potatoes are tender and cooked through, about 1 hour.

Remove the potatoes from the oven and cool.

While the potatoes are cooking, prepare the bacon. Cook the cut bacon in a large skillet until crisp, about 10 minutes. Drain the bacon bits on a paper towel-lined plate.

When the potatoes are cool enough to handle, cut in half horizontally and scoop out the flesh, leaving about ¼-inch border around the potato. Reserve the scooped potatoes for another use.

Fill each potato skin with 2 tablespoons of pimento cheese and top with bacon bits. Return the skins t the oven and broil for 5 minutes. Remove the pan from the oven and top with a dollop of sour cream. Garnish with chopped green onions and serve.