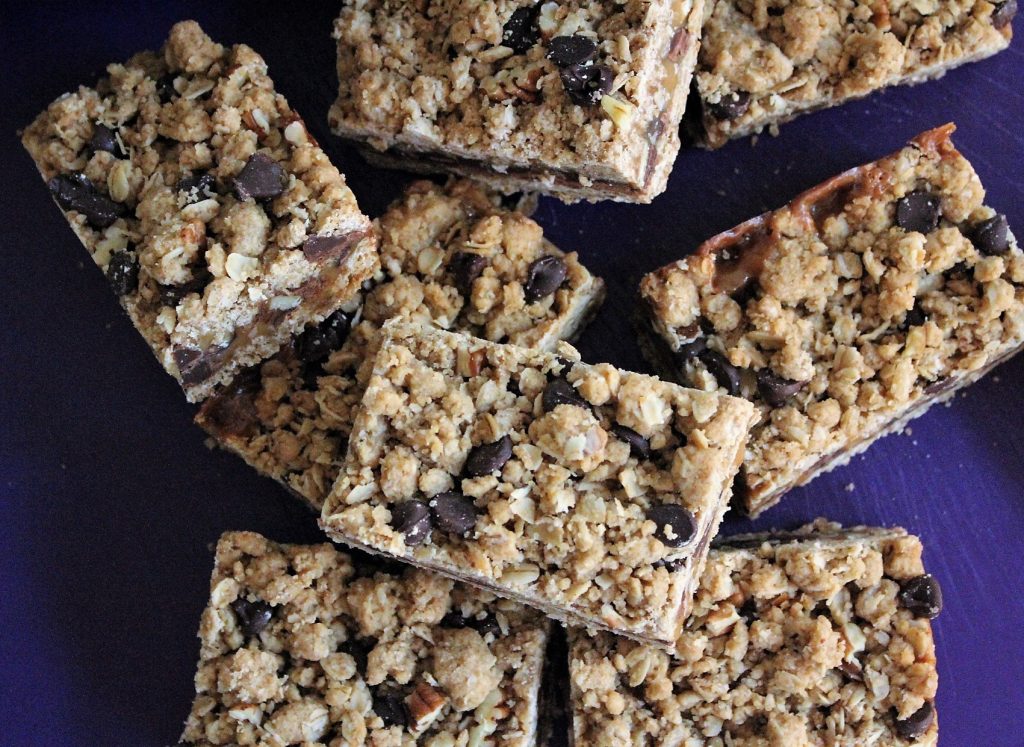 I remember the first time I ever had a carmelita bar. It was when I made my inaugural visit to the Whole Foods in Charlotte, North Carolina during the store’s grand opening week about four years ago. At the time, the closest Whole Foods to my house was ninety miles away in Greenville, South Carolina. So when the store opened in Charlotte, I thought I’d check it out. When I stepped inside, I wanted to break out into song like I was in a scene from the Wiz or something. It was like entering a castle of food! I have to admit, I almost passed out. But I got myself together, because there were free samples to be had. And I wanted to enjoy every single one.

I strolled up and down every aisle, partaking in whatever the store associates had to offer. I ate everything from fresh cut fruit to imported cheese to some weird tasting organic cleansing tea cocktail that made my tongue feel like it was growing hair. That was pretty gross, so I had to double up on the granola at the next station just to get that nasty taste out of my mouth. I continued on with my sampling, but I avoided all beverage items.

The bakery department was glorious, and I sampled everything in sight. The area was packed with all kinds of bread, cakes, cookies and pies. I especially liked the self-serve bakery bin. It was filled with bite-sized samplings of cookies, brownies, bars and a bunch of other chocolate-coated delectables. I couldn’t possibly eat anything else, so I randomly grabbed a few treats from the bin to eat at home later.

The following day, I dug out my stash from my secret hiding place and pulled out this oatmeal-crumb-chocolate-cookie-bar delight. I sniffed it. (Because that’s what you do when you don’t recognize a piece of food.)  Then I took a bite and sigh moaned. It was fantastic! The oatmeal shortbread was so rich, and the chocolate and caramel filling was perfectly gooey. And I just love a good crumb topping. I had no idea what that little bar was, but I knew I had to have another one.

The next time I was in the area, I made a quick stop into Whole Foods specifically for that oatmeal bar. When I got to the bakery bin, I read the list of items available before I just started stuffing my bag. I didn’t know the name of the bar, but I recognized the picture. This time I dropped two of the delightful carmelitas into my bag and almost skipped to the checkout line. Of course I had to rave about carmelita bars to the cashier as she rang them up. I killed the first one while I still in the parking lot, but I managed to make it home with the second one, which I proceeded to hide before the fellas smelled it. It’s like living with a pack of dogs when I bring food food into the house!

Since Whole Foods is still a bit of a drive for me but more convenient than Greenville, I learned how to make my own carmelita bars. I think this recipe is darn good! Dare I say better than Whole Foods? The answer to that is a big-fat-gooey-chocolate-caramel YES! 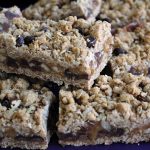 Preheat the oven to 350 degrees F. Spray a 9 by 13-inch baking pan with baking spray. Line the pan with aluminum foil, allowing for a 2-inch overhang on each side. Spray the foil.

Whisk the flour, oats, baking soda and salt in a large bowl.

Mix the brown sugar and butter on medium speed in an electric mixer until light and fluffy, about 5 minutes. Add the vanilla. Reduce the speed to low and carefully add the flour mixture. Mix until thoroughly combined.

Press half the dough into the prepared pan. Bake for 10 minutes, then remove the pan from the oven and cool while you prepare the caramel sauce.

Heat the caramels and heavy cream in a small saucepan over medium-low heat, stirring until the caramels are melted and the sauce is thickened.

Return the pan to the oven and bake until the crumb topping is lightly browned, about 15 minutes. Remove the pan from the oven and cool completely on a wire rack. Refrigerate until the caramel filling is set, about 2 hours. Cut into 16 bars.

Store leftover bars in an airtight container at room temperature or in the refrigerator for up to one week.