As a woman of a certain age, my hormones have become a little discombobulated, so last month I decided to do something about it before I went up in flames.  After much internet research, I learned that a diet high in fat, low in carbohydrates with moderate protein was a great way to balance out-of-control hormones, especially for women. I decided to give the ketogenic (keto) diet a try because it satisfied the desired dietary criteria and allowed for my morning cup of coffee and evening glass of wine.

I followed a self-designed diet plan for about a month, and am happy to report that I am no longer a candidate to play the Human Torch in the next Fantastic Four movie. I’ll leave that to that cute Michael B. Jordan! Six days into the plan I was sleeping through the night, and by the end of the 30 days I was down a size!

One of my favorite dishes to eat while I was on the keto diet was broccoli and cauliflower cheddar soup.  I came up with a delicious update to the popular broccoli soup found in a lot of sandwich shops and restaurants. It’s a rich and hearty soup that’s satisfying and not too heavy. This soup packs a lot of flavor, and it’s quick to make. It was so good I had to control myself so I wouldn’t eat the whole pot in one sitting.

Despite being able to snack on bacon and pork rinds when the mood struck, the keto diet isn’t a diet plan I could do for an extended period of time. Thirty days was my limit. Keto is too restricting in the fruit department for my tastes. The idea of not eating watermelon, bananas, and peaches doesn’t appeal to me. But as soon as I start feeling like someone lit a match to my feet, I’m jumping back into keto flaming feet first. 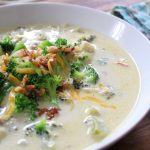 Bring a large pot of salted water to a boil. Place the broccoli and cauliflower in the water and cook for 1 minute. Drain the vegetables and transfer to a bowl of ice water to shock and stop the cooking. Drain and set aside.

Heat the same pot over medium heat and add the bacon. Cook the bacon until brown and crispy, about 7 minutes. Remove the bacon from the pot with a slotted spoon and drain on paper towels. Reserve 2 tablespoons of bacon grease in the pot and discard the rest. Add the onions, carrots and celery. Season with salt and pepper. Cook the vegetables until tender, about 5 minutes, stirring occasionally. Stir in the garlic and cook 1 additional minute.

Add the broccoli, cauliflower, chicken broth and heavy cream, stirring to combine. Season with additional salt and pepper. Bring to a simmer and cook for 10 minutes, stirring occasionally.

Reduce the heat to low and gradually stir in the cheddar and Parmesan until melted. Gently simmer the soup for 5 minutes.

Divide soup among bowls and garnish with bacon bits and shredded cheddar cheese.