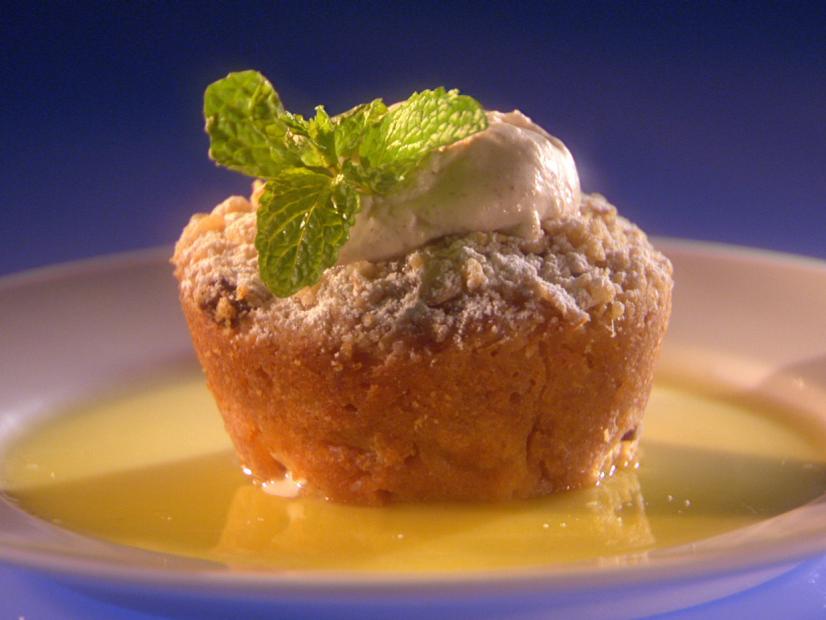 This is my Food Network winning recipe! It smells and tastes just like Christmas! This bread pudding is hard to resist, and we ate it before I got a photo. That’s why I had to borrow the Ultimate Recipe Showdown picture.

Preheat the oven to 350 degrees F. Generously butter a 9 by 13-inch baking pan.

Simmer the raisins and bourbon in a small saucepan over low heat until raisins are plump, about 5 minutes. Remove the pan from the heat and set aside to cool. Add the apples to a small bowl and toss with the lemon juice.

Whisk the eggs, half-and-half, sugar, cinnamon, nutmeg, salt, vanilla, and melted butter in large bowl until combined. Cut the donuts into 1-inch pieces and add to the bowl with the egg mixture and press the down to cover completely in the liquid. Let soak for 15 minutes while you prepare the crumb topping.

To make the crumb topping, add the flour, brown sugar, salt, oats, and butter to a small bowl and mix with a rubber spatula until combined and crumbly.

Stir the apples and the raisins with the brandy into the soaked donuts. (Make sure the donuts have soaked up most of the liquid before adding the apples.) Pour the custard into the prepared baking dish. Sprinkle on the crumb topping. Place the dish on a foil-lined baking sheet and bake until the pudding is golden and set, about 40 minutes. Remove from the oven and cool on a wire rack for 20 minutes.

Meanwhile, make the sauce. Melt the butter in a medium saucepan over medium-low heat. Add the sugar and stir until combined. Whisk in the heavy cream, bourbon, egg yolks and salt. Cook until the sauce has thickened, about 3 minutes, whisking constantly. Do not let the sauce come to a boil. Remove the pan from the heat and cool slightly.

While the sauce cools slightly, prepare the spiced cream. Whipped the heavy cream, confectioners’ sugar, ½ teaspoon cinnamon, and ¼ teaspoon fresh nutmeg, and vanilla in an electric mixer fitted with a whisk attachment until medium peaks form.

Serve the bread pudding with bourbon sauce and spiced cream.